One of the most agonizing elements of Intel's launch of its latest 12th generation Alder Lake desktop processors is its support of both DDR5 and DDR4 memory. Motherboards are either one or the other, while we wait for DDR5 to take hold in the market. While DDR4 memory isn't new to us, DDR5 memory is, and as a result, we've been reporting on the release of DDR5 since last year. Now that DDR5 is here, albeit difficult to obtain, we know from our Core i9-12900K review that DDR5 performs better at baseline settings when compared to DDR4. To investigate the scalability of DDR5 on Alder Lake, we have used a premium kit of DDR5 memory from G.Skill, the Trident Z5 DDR5-6000. We test the G.Skill Trident Z5 kit from DDR5-4800 to DDR5-6400 at CL36 and DDR5-4800 with as tight timings as we could to see if latency also plays a role in enhancing the performance.

In our launch day review and analysis of Intel's latest Core i9-12900K, we tested many variables that could impact performance on the new platform. This includes the performance variation when using Windows 11 versus Windows 10, performance with both DDR5 and DDR4 at official speeds, and the impact that both the new hybrid Performance and Efficient cores.

With all of the different variables in that review, the purpose of this article is to evaluate and analyze the impact that DDR5 memory frequency plays on performance. While in our past memory scaling articles, we've typically stuck with just focusing on the effects of frequency, but this time we wanted to see how tighter latencies can have an impact on overall performance as well. 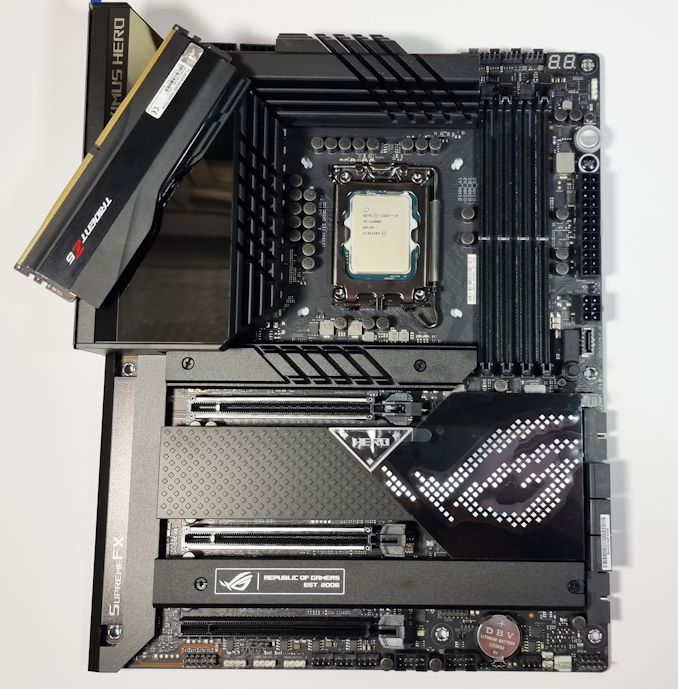 Touching on the pricing and availability of DDR5 memory at the time of writing, the TLDR is that it's currently hard to find any in stock, and when it is in stock, it costs a lot. With a massive global chip shortage that many put down to the Coronavirus Pandemic, the drought has bumped prices above MSRP on many components. Interestingly enough, it's not the DDR5 itself causing the shortage, but the power management controllers that DDR5 uses per module to get higher bandwidth are in short supply. As a result, the increased cost can be likened to a sort of early adopters fee, where users wanting the latest and greatest will have to pay through the nose to own it.

Another variable to consider with DDR5 memory is that a 32GB (2x16) kit of G.Skill Ripjaw DDR5-5200 can be found at retailer MemoryC for $390. In contrast, a more premium and faster kit such as G.Skill Trident Z5 DDR5-6000 has a price tag of $508, an increase of around 30%. One of the things to consider is that a price increase isn't linear to the performance increase, and that goes for pretty much every component from memory, graphics cards, and even processors. The more premium a product, the more it costs.

In March 2021, we reported that Intel effectively discontinued its 'Performance Tuning Protection Plan.' This was essentially an extended warranty for users planning to overclock Intel's processors, which could be purchased at an additional cost. One of the main benefits of this was that if users somehow damaged the silicon with higher than typical voltages (CPU VCore and Memory related voltages), users could effectively RMA the processors back to Intel on a like for like replacement basis. Intel stated that very few people took advantage of the plan to continue it.

One of the variables to note when running Intel's Xtreme Memory Profiles (X.M.P 3.0) on DDR5 memory is that Intel classes this as overclocking. That means when RMA'ing a faulty processor, running the CPU at stock settings but enabling, an X.M.P 3.0 memory profile at DDR5-6000 CL36 is something they consider as an overclock. This could inherently void the warranty of the CPU. All processor manufacturers adhere to JEDEC specifications with their recommended memory settings to use with any given processor, such as DDR4-3200 for its 11th generation (Rocket Lake) and DDR5-4800/DDR4-3200 for its 12th generation (Alder Lake) processors.

When it comes to overclocking DDR5 memory on the ASUS ROG Maximus Z690 Hero, we did all of our testing with Intel's Memory Gear at the 1:2 ratio. We did test the 1:1 and 1:4 ratio but without any great success. When enabling X.M.P on the G.Skill kit, it automatically sets the 1:2 ratio, with the memory controller running at half the speed of the memory kit.

As we highlighted in our review of the Intel Core i9-12900K processor, in certain software environments there can be unexpected performance behavior. When a thread starts, the operating system (Windows 10) will assign a task to a specific core. As the P-Cores (performance) and E-Cores (efficiency) on the hybrid Alder Lake design are at different performances and efficiencies, it is up to the scheduler to make sure the right task is on the right core. Intel's intended use case is that the in-focus software gets priority, and everything else is moved to background tasks. However, on Windows 10, there is an additional caveat - any software set to below normal (or lower) priority will also be considered background, and be placed on the E-cores, even if it is in focus. Some high-performance software sets itself as below normal priority in order to keep the system running it responsive, so there's a clash of ideology between the two. 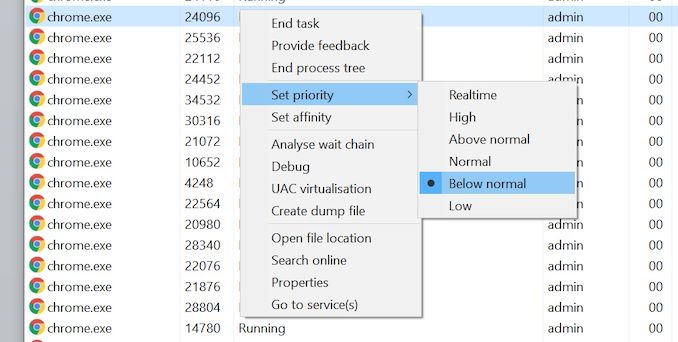 It should also be noted that users running Windows 11 shouldn't experience any of these issues. When set correctly, we saw no difference between Windows 10 and Windows 11 in our original Core i9-12900K review, and so to keep things consistent with our previous testing for now, we're sticking with Windows 10 with our fix applied.

As this article focuses on how well DDR5 memory scales, we have used a premium Z690 motherboard, the ASUS ROG Maximus Z690 Hero, and a premium ASUS ROG Ryujin II 360 mm AIO CPU cooler. In terms of settings, we've left the Intel Core i9-12900K at default variables as per the firmware, with the only changes made regarding the memory settings.

For the operating system, we've used the most widely available and latest build of Windows 10 64-bit (21H2) with all of the current updates at the time of testing. (For those wondering about our selection of GPU, the truth is that all our editors are in different locations in the world and we do not have a singular pool of resources. This is Gavin's regular testing GPU until we can get a replacement; which in this current climate is unlikely. - Ian)

Above are all of the frequencies and latencies we've tested in this article. For scaling, we selected the G.Skill Trident Z5 memory kit as it had the best overclocking ability from all of the DDR5 kits we received at launch. Out of the box it was rated the highest for frequency, and we pushed it even further. The G.Skill Trident Z5 memory was tested from DDR5-4800 CL36 up to and including DDR5-6400 CL36, but also a special case of DDR5-4800 CL32 for lower CAS latencies. Details on our overclocking exploits are later in the review.

Read on for more information about G.Skill's Trident Z5 DDR5-6000, as well as our analysis on the scalability of DDR5 memory on Intel's Alder Lake. In this article, we cover the following: