More widely known for its server-grade models, Supermicro always launches a small number of consumer motherboards, sometimes with some extra flair and hardware we don't see from the regular vendors. This time around, Supermicro's top-tier C9Z490-PGW uses a PLX chip which enables the board to operate with dual PCIe 3.0 x16 or quadruple PCIe 3.0 x8 slots. This is combined with dual PCIe 3.0 x4 M.2 slots from the chipset, a 10 gigabit Ethernet controller, and a Wi-Fi 6 interface which makes the C9Z490-PGW versatile for a wide array of users.

Supermicro is one of the most recognizable brands in the server and workstation market. Still, as we saw in our review of the C9Z390-PGW, Supermicro is consistently injecting its 'server' grade DNA into its desktop models. The difference between Z390 and Z490 isn't as stark as it could be, with the main attribute coming in the way of networking support, with an integrated Wi-Fi 6 MAC, which allows users to utilize CNVi modules. For Intel's launch of the 10th generation Comet Lake processors, Supermicro unveiled a pair of Z490 models, the C9Z490-PG and C9Z490-PGW, with the only difference being that the PGW comes with a Wi-Fi 6 interface, while the PG does not. 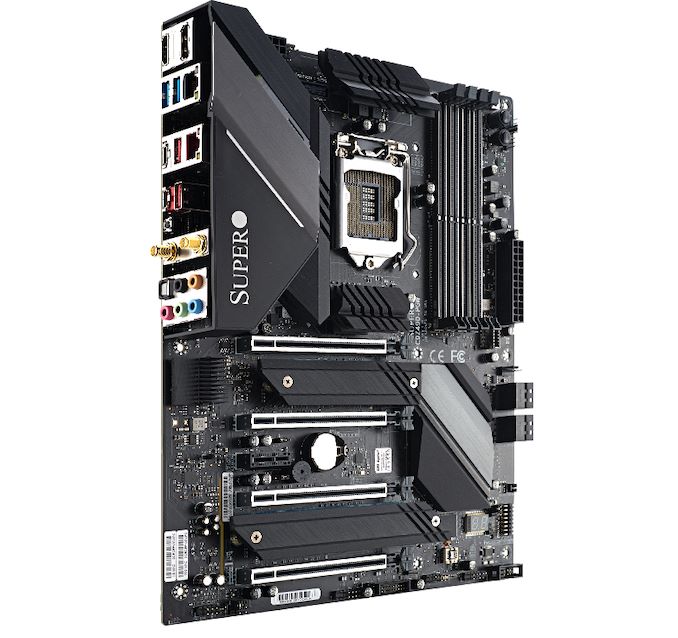 The Supermicro C9Z490-PGW is one of the most unique Z490 models for several reasons, with a combination of unique and server inspired aesthetics, as well as an interestingly premium feature set. It represents its SuperO series of motherboards, which offers server-grade quality and a standard consumer-focused model. Touching briefly on the design of the C9Z490-PGW, it uses a blend of black and silvers to create a classy two-tone theme, with solid black aluminum power delivery heatsinks and SuperO metal reinforcement on both the PCIe and memory slots. The C9Z490-PGW drops integrated RGB LED lighting and RGB headers and doesn't play on the lack of RGB support as a marketable feature like some vendors do.

Obviously the big feature is the PLX switch, enabling 32 PCIe 3.0 lanes on this motherboard. The use of PLX switches on mainstream motherboards was rife in the time of the Z77 platform, however it has fallen by the wayside, mostly due to the increased cost as the company that used to make these switches was acquired, and the price was risen to a more consumer-unfriendly price point. With this switch, the board can support two add-in cards at a full x16/x16, or four cards at x8/x8/x8/x8, all at PCIe 3.0 speeds (because Comet Lake is PCIe 3.0 and this switch is PCIe 3.0 only). This opens up a number of avenues for users wanting to enable, for example, a Comet Lake-based storage system with RAID cards. To get this many lanes would otherwise require a different platform, usually in the high-end desktop space, or a Xeon. On top of the PCIe lanes, there are also dual PCIe 3.0 x4 M.2 slots, with four available SATA ports supporting RAID 0, 1, 5, and 10 arrays and networking through a 10 gigabit Ethernet controller, Wi-Fi 6 with additional support for BT 5.1 devices. It also includes a premium onboard HD audio codec, with lots of USB support onboard, including a stacked rear panel and plenty of USB headers located around the edge of the PCB. It also has a modest level of memory support, with capability for DDR4-4000, with a capacity for up to 128 GB.

In our performance testing, we saw the expected levels we would associate with a board that is running Intel's default power settings. Supermicro boards often run at strict Intel defaults, whereas consumer motherboards are more liberal with Intel's suggestions for power limits and turbo levels. If this is taken into account, the C9Z490-PGW performed competitively, especially against the ASUS ROG Maximus XII Hero WiFi when comparing it when running without ASUS's enhancements. These had no real impact on gaming performance, but it performed slightly lower than other Z490 models, some of which have mult-core enhancement features enabled by default. Our system tests showed that power consumption is noticeably higher than other models on test, predictably down to the PLX chip. It also has longer POST times than other Z490 models, which is a common theme for Supermicro boards due to a focus on professional-level elements. Out of the box, default DPC latency performance wasn't too great, but it is still an acceptable score. 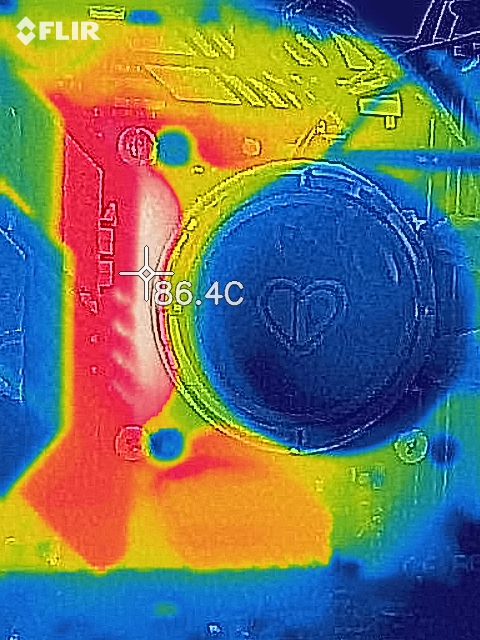 Overclocking with the C9Z490-PGW wasn't as straight forward as first would seem. It uses a competent 8+2 phase power delivery, but the firmware is restricting the capabilities. The only way to see a noticeable uplift in performance is to manually adjust the PL1 and PL2 power limits within the BIOS. Without making these adjustments, we saw no real benefit to overclocking our Core i7-10700K, even when overclocking to 5.1 GHz. We saw thermal throttling at 5.2 GHz, and unfortunately, the board's VDroop control is quite poor, with a much higher load CPU V-Core than is set in the BIOS. This caused havoc in our power consumption testing while overclocking. In our power delivery thermal testing, we also noticed that the VRMs got quite warm, and the CPU area of the socket was much hotter than it should be, especially for an ATX model. While this board is overclocking capable, it's designed to fly much more at stock than it is overclocked. Given the specialized features, we're ok with that.

The Supermicro C9Z490-PGW was initially launched with an MSRP of $395, but it is currently available to purchase at Newegg for just $360. This puts it directly against models such as the ASRock Z490 Taichi ($370), the GIGABYTE Z490 Aorus Master ($389), and the ASUS ROG Maximus XII Hero ($399), but the Supermicro is set apart with the use of a PLX chip. The Supermicro C9Z490-PGW is a different sort of motherboard, but still with a marketing strategy focused on the gaming market, but not conforming to include some of the highly marketable 'gaming' features such as RGB. It's a solid board with a solid feature set, but SuperO is not as widely known as other gaming brands such as Aorus or ROG.

Read on for our extended analysis.