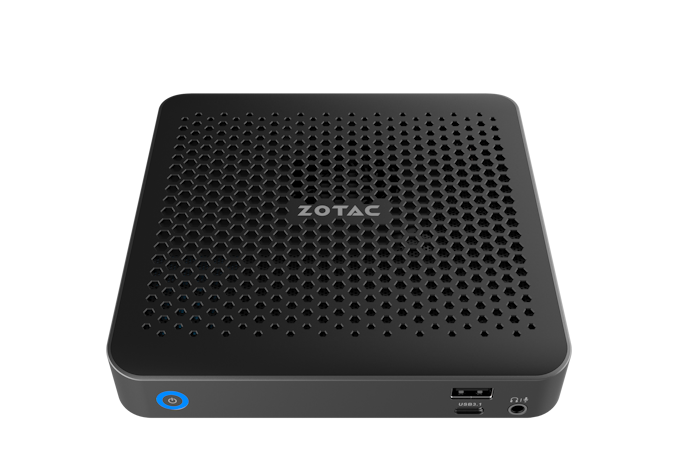 All told, ZOTAC has launched several ZBOX SFF PCs at this year's CES. Typical for the company's wide reach, they're gearing up to release a range of boxes at multiple TDPs, and incorporating CPUs from both x86 vendors. Towards the higher end of their latest product stack is the ZOTAC ZBOX Edge MI643, which like the rest of the Edge series PCs, is non-exclusively focused on the edge computing market. Overall, the MI643 is a compact desktop system based on Intel's Core i5-10210U quad-core processor, and measures just 1.12 inches tall.

Elsewhere, some of the main features of the ZOTAC ZBOX Edge MI643 include two SODIMM slots capable of supporting up to 64 GB of DDR4-2400/2666 memory, with two M.2 slots for available for M.2 SSDs. On the rear panel is two Gigabit Ethernet ports, as well as an antenna port for the 802.11ac wireless interface (which also offers BT 5.0 connectivity). In terms of USB options, there are three USB 3.1 G1 Type-A ports and one USB 3.1 G1 Type-C port. The ZOTAC ZBOX Edge MI643 also includes a single 3.5 mm audio jack, a microSD card reader, and a pair of video outputs consisting of an HDMI 2.0 port and a DisplayPort 1.2 output.

At present, there is no information on the expected pricing or availability of the MI643, but it is expected that they will hit retail shelves in the coming months.