The HTC Droid Incredible Review, Clearly Better than the Nexus One

I'm very proud of companies like ASUS and HTC. These aren't your tradtional consumer electronics companies. They have their roots in the OEM business, working hard but for very little recognition. These Taiwanese companies have been desperately trying to bridge the gap to the mainstream consumer market over the past few years and honestly, they've done a great job thus far. Just earlier this year we saw HTC build Google's first branded smartphone: the Nexus One. A clear shot at the iPhone, the Nexus One was well built and only fell behind in software issues. It lacked the polish that Apple was able to provide with the iPhone. Rather than depend on Google to fix that, here we are a few months later and HTC has a solution.

It's called the Droid Incredible and it's available through Verizon ($199 subsidized with a 2-year contract). Similar in size and features to the Nexus One (not surprising, the two share the same base platform), the Incredible was a strong enough competitor to make Google cancel plans for a Verizon Nexus One. This isn't just a cosmetic thing though. The Incredible has real hardware and software advantages over the Nexus One. HTC has even fixed some of my issues with the Android platform. 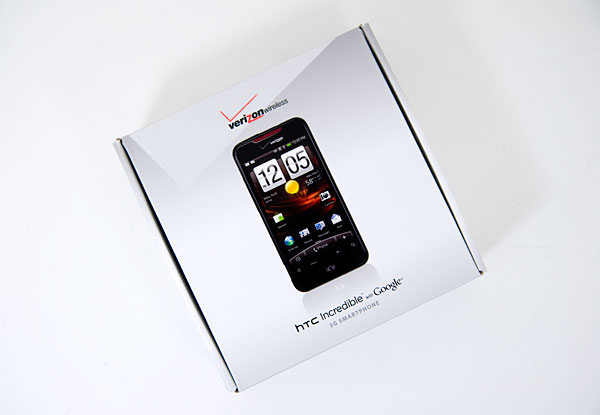 In the box you get the phone, a USB cable and a charger. There's no included micro SD card and no case, both of which Google gives you with the Nexus One. 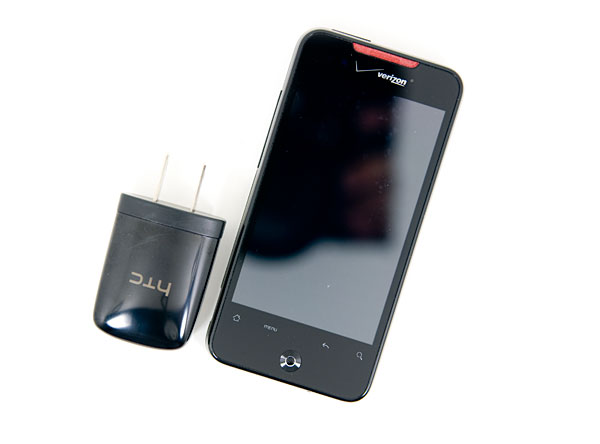 It's clear at first sight the pecking order in HTC's eyes. While the Nexus One was very much a Google phone, down to requiring a Gmail account before you could even use your phone, the Incredible is much more agnostic. A large HTC logo followed by a smaller with Google brand on the bottom, a bit bigger than the Verizon on the front but still not terribly prevalent: 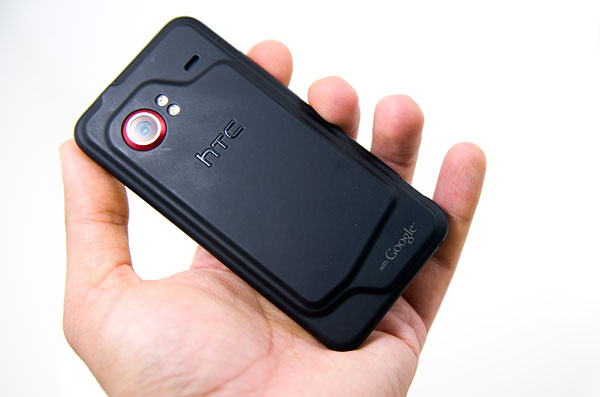 HTC doesn't want to be another Taiwanese OEM house, it wants to be an ASUS, a Palm or an Apple. It wants brand recognition and to get there, it needs good hardware, as well as software differentiation. While the Incredible runs Android 2.1 just like the Nexus One, it features HTC's custom software on top of Android called Sense. HTC Sense is a collection of OS customizations, tweaks and even apps/widgets that are shipped by default on the phone. Google fully embraces this sort of UI flexibility making it very much the Windows Mobile of today rather than something iPhone-eqsue. 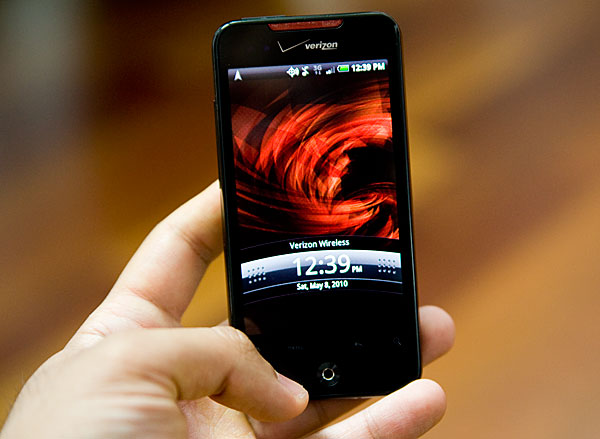 The basics of Android are still the same (read my Nexus One review for that), you get multiple home screens and a separate listing of all apps on the phone, but Sense makes the default setup closer to perfection in my mind. It’s all much more polished. HTC/Verizon ship a number of preconfigured Scenes which define what widgets/icons are present on your home screens by default. The Nexus One by comparison comes with more of a blank slate. Both phones can get to the same end point, but the Incredible just ships a bit more complete from the start. 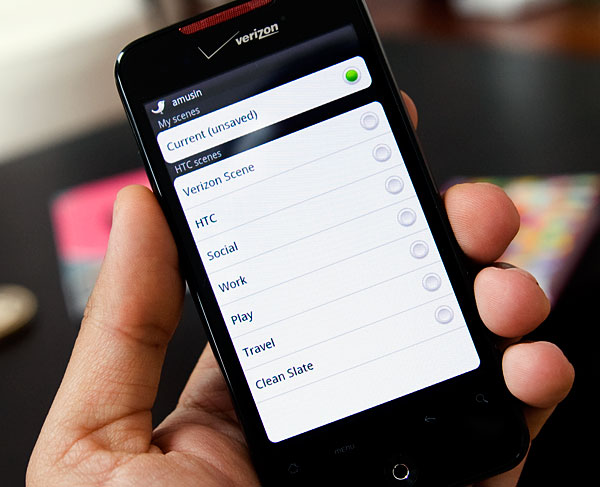 I found that the default Sense scene was pretty well done to begin with. You have a home screen for emails, one for Twitter and one to enable/disable things like WiFi or Bluetooth. The predefined scenes are self explanatory (e.g. the work scene puts more emphasis on the calendar, email and stocks), or you can always change things around and save your own custom scene.

HTC offers its own Exposé clone with Sense. If you want to quickly see what’s on all of your home screens just press the optical joystick and you’ll zoom out to see all seven screens at once. Tap on any one to select it. 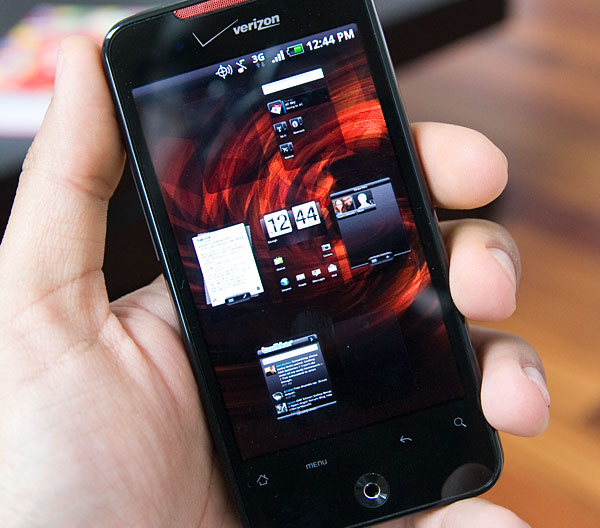 The modifications aren’t exclusive to UI, individual applications are different from your standard Android install. The Mail app has a threaded message view where all of your exchanges with a single contact are grouped together. There’s still no way to delete multiple emails at once, no way to copy/paste from an email and no way to search through emails stored on an IMAP server other than Gmail. Imperfect much?

The email widget is a great way of quickly reading through emails. Swipe up to view your next message, swipe down to view the previous one. Again there's no quick way to delete from this view, you have to tap the delete button and hit OK. The Twitter widget gives you similarly quick access to what's going on. The idea is to make your home screens function as intended from the start rather than relying on the user to configure them. HTC did a great job here.

You can group contacts together and send SMSes or emails to an entire group rather than having to manually fill out a To: field with multiple names: 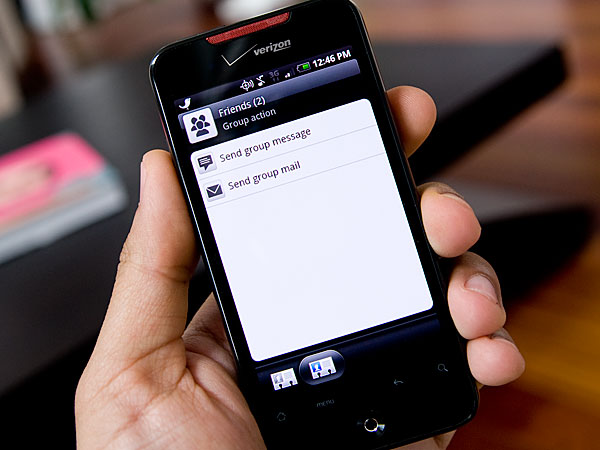 The Calendar and Camera apps are nicer and in general I don’t believe any of the HTC modifications do any harm to Android. In fact, I’d say that HTC’s added polish is a real benefit. It makes me wonder why Google doesn’t do some of this on its own.