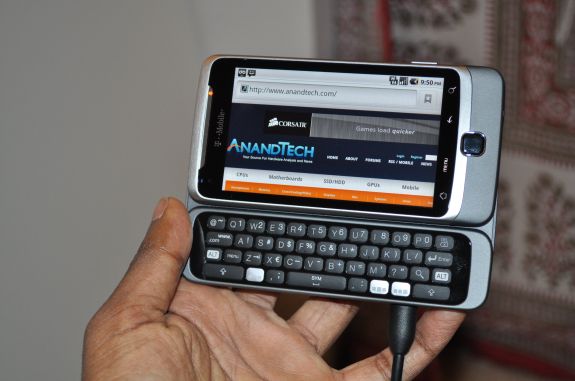 So, the son of G1 is now out and open for retail consumption, and it’s certainly an interesting device. This is one of the first high end GSM HTC Android devices in a while, so it’s been understandably hyped. The keyboard is another unique factor - this is HTC’s first Android device with a physical keyboard since the original G1, and the G2, along with the Samsung Epic 4G and Droid 2, is currently the one of the few high end Android devices with a physical keyboard.

The G2 comes with a Qualcomm MSM7230 SoC, an 800 MHz part based on the 2nd generation Snapdragon core. It’s now on a 45-nm manufacturing process (the original Snapdragon QSD8x50 parts are 65nm) and has an updated Adreno 205 GPU. Beyond the die-shrink, the CPU seems to be relatively unchanged compared to the first gen-Snapdragon, just running at an 800 MHz frequency. The lower clock speed is probably to keep power consumption and yield in check for Qualcomm's first 45nm SoC. The Adreno 205, on the other hand, seems to be a pretty big improvement over the previous generation Adreno 200. The 205 adds hardware acceleration for Flash, SVG vector graphics hardware acceleration, and significantly improves shader performance over the Adreno 200. Performance is expected to be far more competitive to the PowerVR SGX 530 and 540 than the Adreno 200 ever was. So even though it doesn’t break the magical 1GHz mark, the MSM7230 is still a very potent SoC, especially in a device that forgoes the burden of a custom UI layer on top of Android.

The MSM7230 in the G2 has support for 3GPP Release 7, which includes HSPA+ and Evolved EDGE support. The G2 supports HSDPA class 10 for a maximum theoretical downstream rate of 14.4 megabits/s, and HSUPA class 6 for a maximum theoretical upstream rate of 5.76 megabits/s. Qualcomm's MSM7x30 series SoC comes in another flavor - the MSM7630 -  which packs HSPA+ support alongside CDMA voice and data.

Rounding out the other specs, we’ve got 512MB RAM (also part of the SoC), 4GB internal NAND with an 8GB microSD card preinstalled (more on this later), a 3.7” Super-LCD TFT display with an 800x480 resolution, a 5 megapixel camera with autofocus and an LED flash, 720p video recording at 30fps, and a removeable 4.81 Wh (1300 mAh) battery. Oh, and one of the weirdest hinges out there right now.