The motherboard in the MAGNUS ONE uses a H470 PCH. The CPU's integrated GPU display output (HDMI 1.4a) is also available in the rear panel. The RTX 3070 Twin Edge features four display outputs, and either set can be active for up to four simultaneous display streams. The PC also includes Killer AX1650 Wi-Fi and dual LAN ports (1x 1Gbps + 1x 2.5Gbps) as noted in the specifications table in the previous section.

The Zotac ZBOX MAGNUS ONE sports a redesigned GUI for its BIOS. The use of the H470 PCH and a non-overclockable CPU mean that the BIOS doesn't need a ton of enthusiast features. The video below presents the entire gamut of available options in the system's BIOS.

The AIDA64 system report for the hardware configuration supplied by Zotac provided the following information:

A pictorial representation of the internal bus structure in relation to the external ports is presented below. 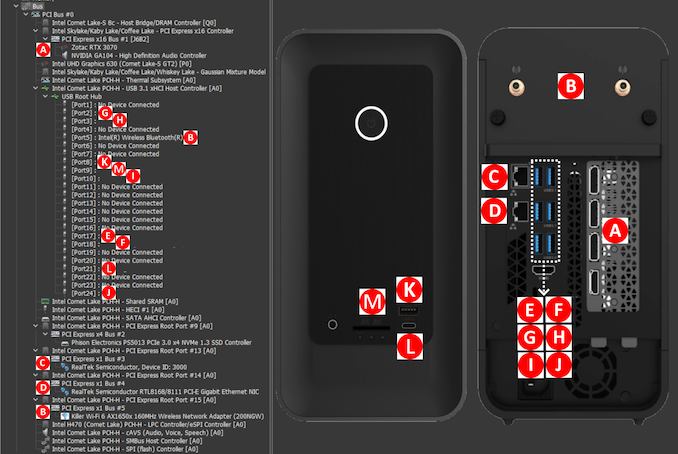 All the USB ports in the system are off a single root hub in the PCH. The SDXC card reader is enabled by a Realtek USB 2.0 card reader, and is restricted to a maximum speed of around 40 MBps practically (no UHS-II support). The audio jack is backed up by a Realtek ALC269 audio codec. Though there are plenty of USB ports to go around, the DMI bottleneck means that it might be difficult to get simultaneous peak performance from more than a couple of ports at a time. All the networking I/Os are also off the PCH, and all the 16 PCIe lanes off the processor are dedicated to the GPU (as it should be in the case of a gaming PC).

In the table below, we have an overview of the various systems that are being compared against the Zotac ZBOX MAGNUS ONE. Note that they may not belong to the same market segment. The relevant configuration details of the machines are provided so that readers have an understanding of why some benchmark numbers are skewed for or against the MAGNUS ONE when we come to those sections.